Mellor has announced a significant new order from Transport for London (TfL) for 90 of its Tucana II buses.

Set to be deployed at various Dial-a-Ride hub locations around central and suburban London, the Tucana IIs are all being built to an identical specification which meets the access needs of the Dial-a-Ride service. The buses are fully accessible with rear door, boarding ramp and seating for eight passengers.

The Tucana II is built on the proven Volkswagen T6 chassis and benefits from a fully flat low-floor passenger saloon and has capacity for up to four wheelchairs, despite its compact size which is essential in congested city environments. Deliveries have just begun and will continue until March 2019.

“These new vehicles are a big boost to our efforts to clean up the capital’s toxic air. The Tucana II meets our tough new Ultra Low Emission Zone environmental standards. It will help us to get older and vulnerable Londoners from A to B, while protecting the health of future generations.

“This is also a great example of how London’s transport system can benefit the rest of the UK economy. We are proud of the fact that this order supports jobs in Rochdale and Scarborough, as well as the wider supply chain in the North of England.”

“It will be great to see the Tucana II in service around London and we’re excited to be supplying one of the most recognised capital city Dial-a-Ride organisations in the world.

“The Tucana II leads the way in providing the sector with a vehicle that’s economical to run and provides an enjoyable experience for passengers and drivers while meeting the environmental challenges of modern cities.

“As demand for Mellor vehicles has been steadily increasing, we anticipated quite some time ago that additional manufacturing capacity would be needed so we could meet all of the requirements of existing and new customers alike.

“This exciting new business dovetails nicely with that growth strategy. Ongoing production and delivery of our existing orders will be unaffected.” 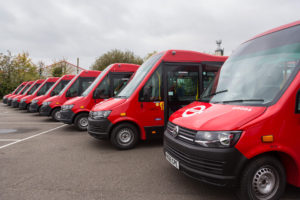 Sign up to receive the latest news and product updates